The company’s focus is the treatment of addiction with psychedelic drugs, therapies and technologies, in the pursuit of providing hope for people for whom the current treatment methodologies are not working, CEO Anthony Tennyson told PSYCH following the company’s debut on the exchange.

‘That requires big money, and that’s what the capital market strategy is all about. Yes, it’s about creating shareholder value, but it’s actually about having access to capital to run our projects to achieve our passion,’ Tennyson said.

The company’s go-to-market strategy is holistic in nature, with planned and in-progress IP drug development; tailored therapy methodology; enabling technology and an owned/operated chain of treatment centres across the UK. Following success in its home region, the company will look to pursue other global markets through licensing agreements to make its addiction-focused treatment available outside the UK. 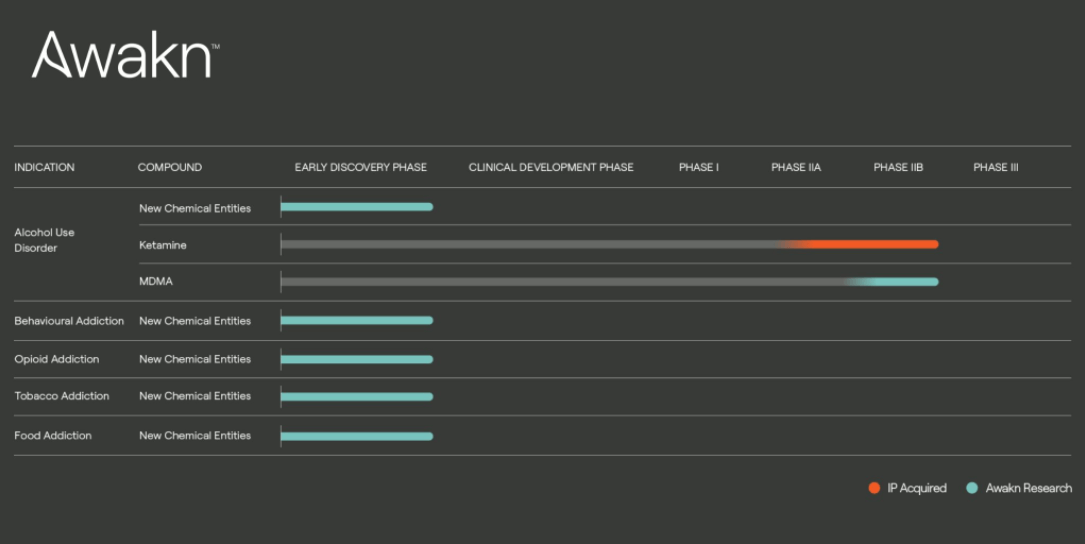 ‘Addiction is the single-biggest unmet medical need in the world today. There is a massive and material treatment gap. Only a small proportion of people with addiction seek and secure treatment, and the people that do secure treatment, the outcomes are generally poor… We believe that psychedelics have the potential to radically improve patient outcomes and treatment outcomes for addiction. There is an emerging body of evidence that supports that statement. These are conditions that are detrimental to individuals, families and communities. We’re providing hope for those people.’

In February, the company announced the publication of positive results from Chief Medical Officer Dr Ben Sessa’s Bristol Imperial MDMA in Alcoholism (BIMA) trial, an open-label safety, tolerability and proof-of-concept study investigating the potential role for MDMA-assisted psychotherapy in treating patients with alcohol use disorder. The study, chaired by Awakn’s chair of the Scientific Advisory Board, Prof. David Nutt, Dept of Medicine, Imperial College London, will enter its Phase 2B in the UK, furthering investigation into the safety and efficacy of the treatment.

The company also works alongside Dr Celia Morgan, as its head of ketamine-assisted psychotherapy for alcohol use disorder practice, whose current clinical trial results will be published in the American Journal of Psychology, when complete. Awakn has successfully licensed the IP from the trial at the University of Exeter, which positions it as the only company in the world using evidence-backed ketamine-assisted psychotherapy for alcohol use disorder when its clinics open later in 2021.

‘What’s really required to be successful are four core pillars: the compound, the therapy, the therapist and the clinical environment. If you focus on the compound only, you’re really just propagating the existing psychiatry model, which is to prescribe and send home and not get to the root-cause trauma that leads to most addictions occurring.’

Tennyson said that entry into capital markets will provide the necessary access to capital for Awakn to accelerate its delivery and development efforts, allowing the company ‘to help more people in a way that’s bigger, better and faster’.

The listing follows the successful completion of the previously announced reverse takeover of a Canadian public company, 2835517 Ontario Ltd., by Toronto-based Awakn Life Sciences Inc. The public company was subsequently renamed Awakn Life Sciences Corp. in connection with the reverse takeover and the listing on the NEO. Additionally, the Company raised gross proceeds of approximately US$8.3 million through a brokered private placement.

Dr Sessa is scheduled to speak at the 7 July PSYCH Investor Summit: Research & Development, where he will highlight findings from Awakn’s research into the area of psychedelics.

For more information on Awakn, visit the company’s website.