In May 2020, Prohibition Partners conducted a nationally representative consumer survey in the US and the UK, the aim of which was to gauge awareness of, and attitudes towards the potential use of psychedelics for the treatment of a variety of mental health conditions. Here we provide a taster of some of these survey results. A topline analysis of the results will be available in Prohibition Partners’ fully updated Psych: Psychedelics as Medicine report, second edition, due out later this month. For more information on data, insights and intelligence on psychedelic therapies, contact [email protected]

Based on our survey findings, an estimated 150 million adults (aged 16 years plus) in the UK and US (51%) support the legalisation of psychedelics for medicinal use, while 25.8 million people (13%) disagree and 71.5 million (36%) are unsure. In July 2020, a ballot initiative in Oregon collected a sufficient number of valid signatures to successfully petition to include the legal use of psilocybin in clinical settings for the treatment of mental health conditions, on the November 2020 ballot. While a number of cities in other states, including Oakland and Santa Cruz in California and Denver in Colorado, have decriminalised psychedelics for personal adult use. 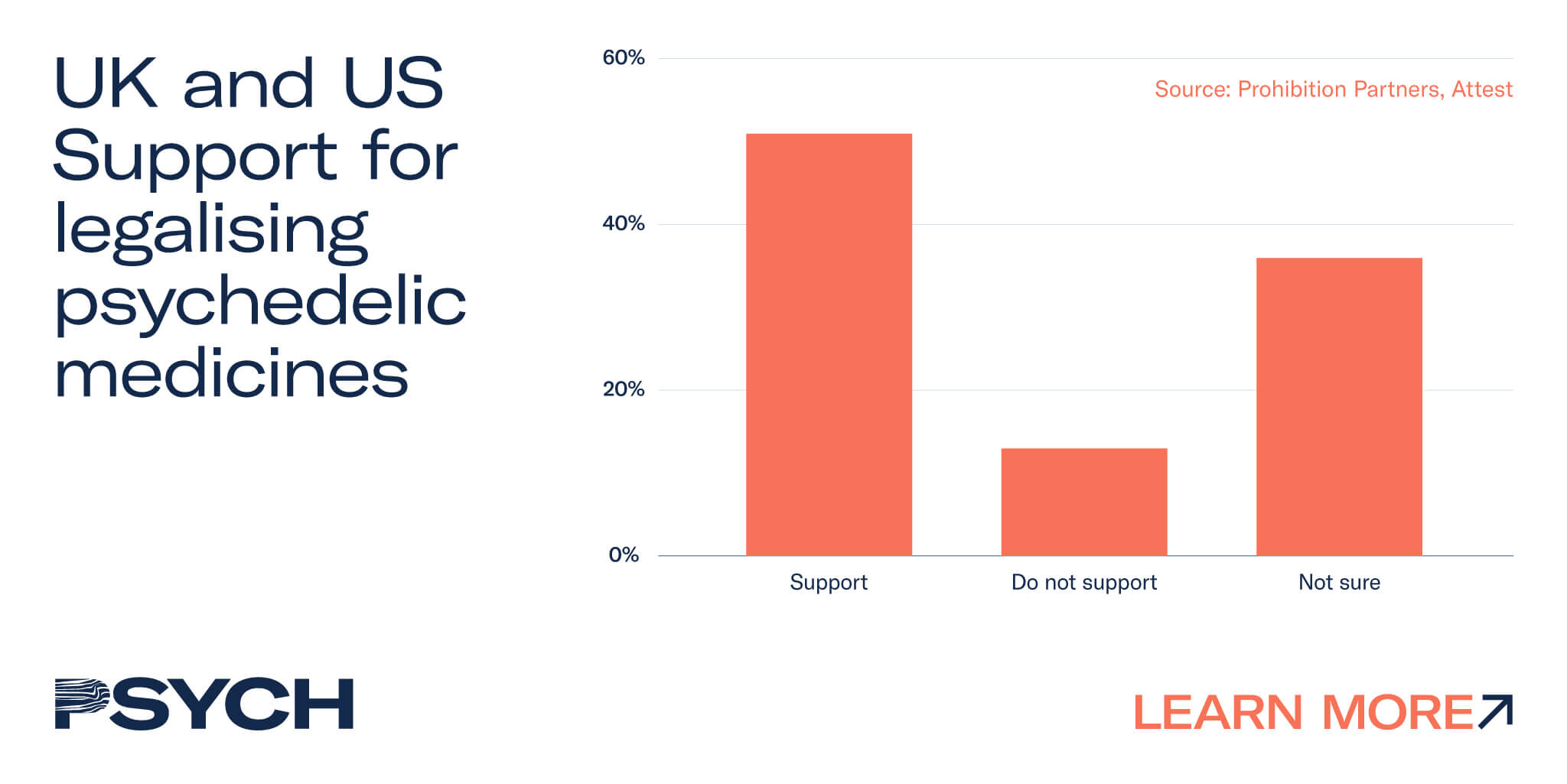 There is a particularly strong appetite for the legalisation of psychedelics to treat mental illness, among adults surveyed in the US, with more than one in five strongly agreeing with the statement. This may be down to public concern for the welfare of US veterans returning from conflict zones, suffering from PTSD. In 2017 the US FDA granted breakthrough therapy designation to MDMA-assisted psychotherapy for the treatment of PTSD.

Psychedelics perceived as a ‘threat’ to mental health

While there is much cause for optimism in Prohibition Partners’ proprietary data, there is also evidence of scepticism among some categories of adults. Overall, 40% of adults did not think it was a good idea to treat mental health conditions with psychedelics and 37% of adults believe psychedelics actually cause mental illness rather than cure it. Married men in the 35-44 year age category were most likely to view psychedelics negatively. Only 28% of people over the age of 55 shared this opinion. The age profile of those who agree that psychedelics are not a good idea for treating mental health conditions may be a result of the era in which these adults grew up, at the height of the so-called ‘War on Drugs’.

Many psychedelics were scheduled as narcotics following the 1971 Convention and the demonising of psychedelic compounds such as psilocybin, LSD and MDMA began in earnest over the course of the following three decades. Conversely, seniors (aged 55+) lived through the 1960s. They may have participated in the hippie counterculture and may even have had personal experiences with psychedelics. As a result, older adults may take a more relaxed attitude to psychedelics than other generations and may be more open to the prospect of its use for mental health conditions.

Women were less likely to view psychedelics for mental health treatment in a negative light. This may be influenced by the pervasive nature of mental health conditions such as depression among women. Depression is believed to be twice as common among women as men, according to the World Health Organisation (WHO). Depression is estimated to affect 1 in every 3 people in the world. Female adults suffering from depression, particularly those who cannot find relief in conventional medicines such as antidepressants, known as treatment resistant depression (TRD), are perhaps more likely to be open to the potential of psychedelics to treat mental health conditions.

Desire for alternative treatments for loved ones

Despite the reservations expressed by some adults in relation to the use of psychedelics as a mental health treatment, 45% stated that they ‘know someone who would benefit from psychedelic therapy’. This was higher among adults in the US (49%) than in the UK (40%). This statistic reflects the pervasive nature of mental health conditions such as depression and anxiety as well as reflecting an appetite for alternative therapies to cure mental health issues. More than 7 out of 10 adults who know someone who would benefit from psychedelic therapy also said that it is the breakthrough that mental health has been waiting for, compared to only 5% among those who don’t.

The spread of COVID-19 coronavirus is likely to exacerbate already high rates of anxiety and depression worldwide. Psychedelics have the ability to transform psychotherapeutic approaches to the treatment of mental health conditions such as PTSD, depression and anxiety. In terms of public perception however, psychedelic therapies are likely to remain on the fringe and will continue to be seen as a potentially effective but radical alternative to more established, conventional treatments until such a time as they become mainstream. Fortunately, progress to that end is already being made, with US FDA approval on the horizon for two psychedelic compounds, MDMA-assisted psychotherapy for sufferers of PTSD by 2021 and psilocybin for treatment of major depressive disorders (MDD) and TRD as early as 2023.