Psilocybin was first isolated in 1958 by Albert Hofmann and is one of the most researched psychedelic medicines, with over 65 clinical trials exploring its efficacy to treat mental illness.

Psilocybin has been found in hundreds of varieties of fungi, but Oregon is proposing that only one mushroom species – psilocybe cubensis – will be allowed in its regulated framework.

As with other psilocybin-producing mushrooms, psilocybe cubensis contains a number of different psychoactive compounds, including psilocin, baeocystin and norbaeocystin, which are far less understood and are thought to have symbiotic effects with psilocybin. Therefore patients may experience different outcomes with synthetic psilocybin and psilocybe cubensis due to the presence of these alkaloids.

Filament Health is leading research into the mechanisms of these compounds, and CEO Benjamin Lightburn will outline evidence for multiple active metabolites working synergistically at PSYCH Symposium: London 2022.

Ahead of the seminal event, PSYCH sat down with Lightburn to discuss Filament Health’s novel approach to drug development and botanical psilocybin and to ask about the drivers for exploring naturally extracted psychedelic medicines over synthetic alternatives.

‘First and foremost, these are all natural products.They were identified because there was historical use and psychoactivity. That psychoactivity was later attributed to various chemical constituents, like psilocybin and DMT.

‘When you manufacture the product through chemical synthesis, you only make the primary metabolite – psilocybin in the case of magic mushrooms, or DMT and harmaline in the case of the ayahuasca. But in nature these raw materials contain many more chemical constituents.

‘Taking psilocybin from a mushroom and purifying it 99.9% would be an isolated natural psilocybin, and we wouldn’t expect that to have a different effect to synthetic psilocybin.

‘Our products are not that. Our products are very carefully constructed to include the secondary metabolites in the same ratios as they are found in nature. That is what makes our product botanical in addition to ‘just’ natural.

‘There is lots of anecdotal evidence that different species and varieties of hallucinogenic mushrooms have different effects and therefore it’s very possible, even probable, that some of these different varieties may have increased efficacy or benefits over synthetic psilocybin.

‘After all, these other compounds evolved in nature for a reason, right? Why? We don’t know and there hasn’t been a lot of research done. Until now, no one has made a standardised botanical formulation of these psychedelic raw materials and turned them into a clinical-trial drug candidate- a necessary precondition for assessing any of this.’ 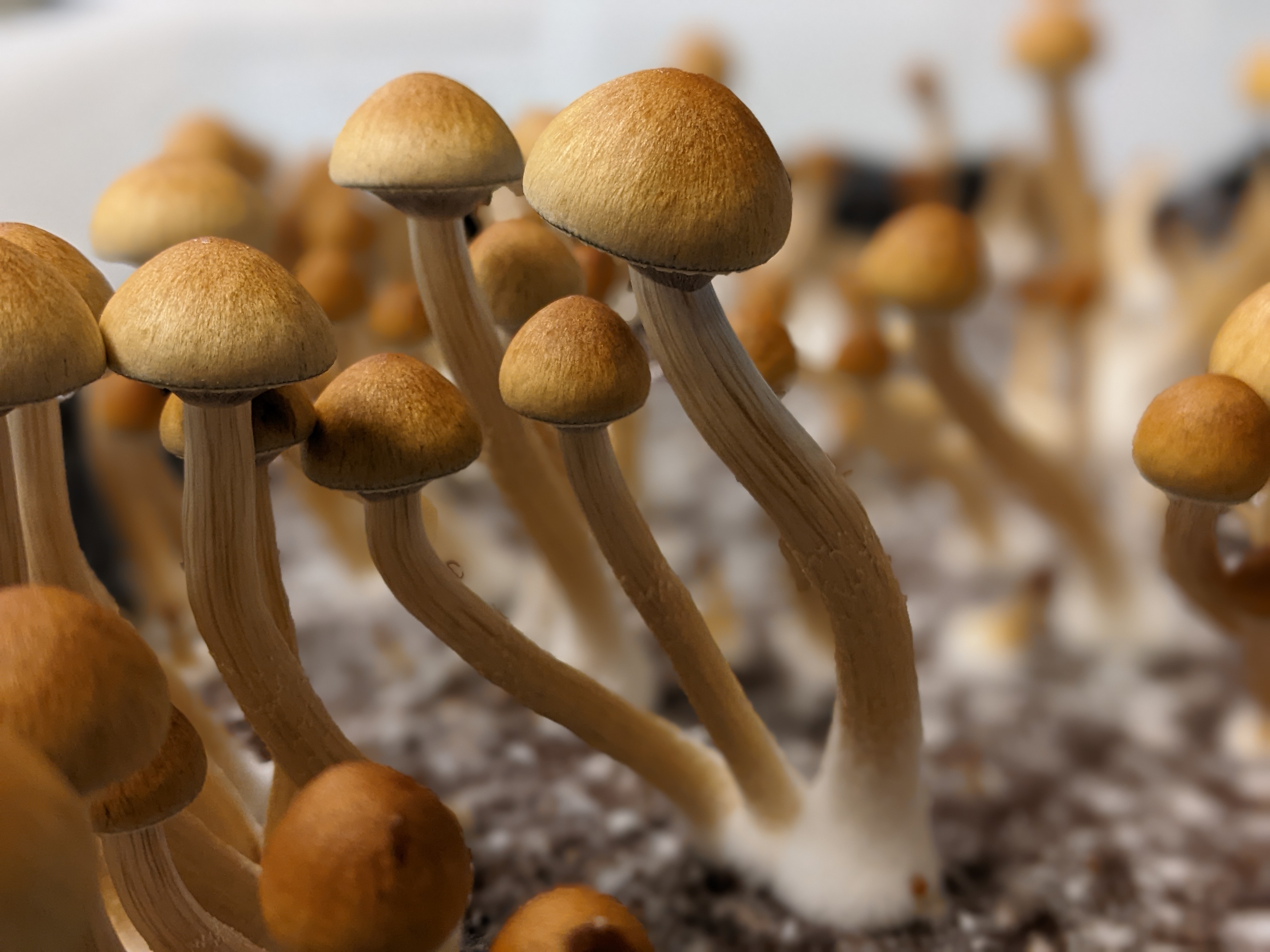 ‘PEX 10 is our first candidate,’ explained Lightburn. ‘That is the standardised 25-milligram dose of psilocybin, which also contains all the other metabolites.

‘If you looked at a chromatograph, which is like the fingerprint of all the different alkaloids found in the mushroom, and superimposed it onto a chromatogram of our final product, they would look almost identical.

‘All that has changed is the presence of all the other extraneous material. We basically subtracted a whole bunch of the non-bioactive material, and then added other carriers to help with the absorption of psilocybin in the gut and to precisely standardise the dose.

‘We also have two products that are standardised psilocin. Psilocin is the active form of psilocybin and because psilocin is so unstable, especially when manufactured synthetically, up until now nobody, as far as we are able to tell, has been able to make psilocin into a standardised and stable drug.

‘We cracked that challenge for the first time as we simply looked at these things naturally. When we were starting out, making our first extracts, we saw the solution produced by the magic mushroom and thought we might as well make a product based on naturally occurring psilocin.

‘We are now in Phase I trials designed specifically to assess the benefits of direct psilocin administration versus psilocybin. Because you don’t have to wait for the conversion into psilocin to take place, we might expect a faster onset time. We might also expect better absorption and therefore a higher peak intensity.

‘We might lessen gastrointestinal side effects because this conversion is thought to primarily occur in the gut. But, most importantly, we think that administering psilocin directly will allow for more stable and consistent dosing.

‘This is because different people metabolise pro drugs differently. Some might get a complete conversion of psilocybin into psilocin, whereas some might get half the conversion. The research and the data show that the hallucinogenic and therapeutic responses are actually tightly correlated to the blood plasma level of psilocin – rather than to the oral dosage of psilocybin.

‘We think that we can narrow this gap substantially and essentially decrease the number of non-responders to the psychedelic therapy by giving people psilocin directly. It’s surprising, but psilocin has never been directly administered in a clinical trial ever before.’ 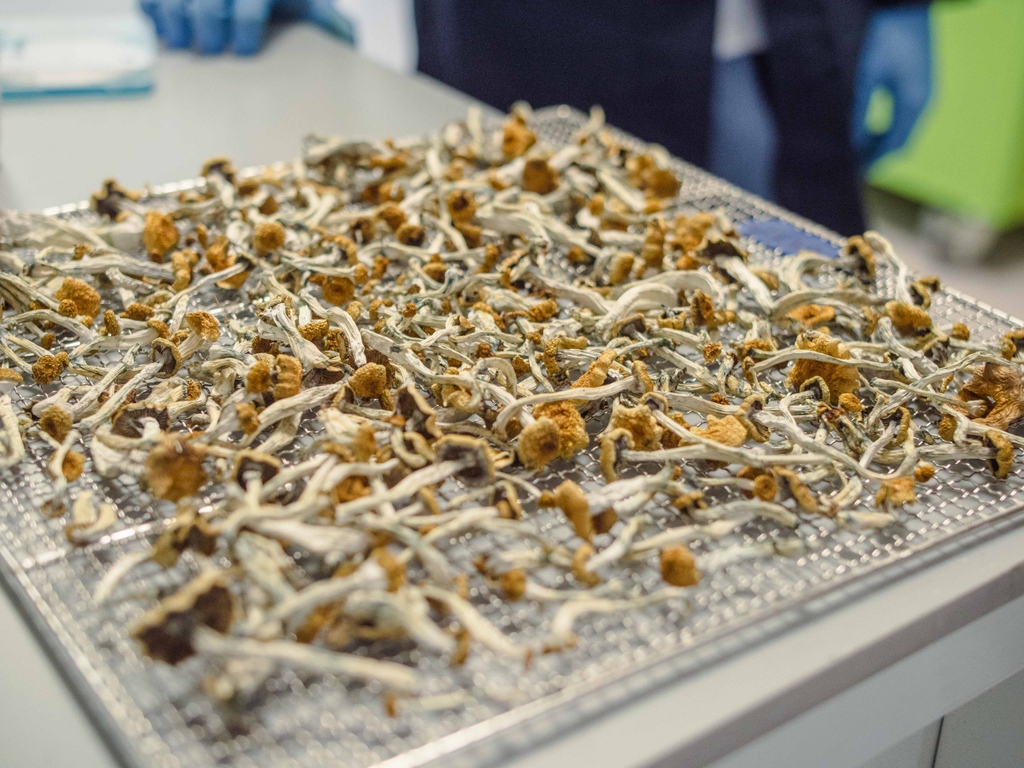 PSYCH was keen to learn if Lightburn was aware of any other companies experimenting with the other psychoactive alkaloids found in psilocybin mushrooms.

‘There are a number of companies looking at the secondary metabolites, in isolation, and typically it is companies focused on synthetic psilocybin. They will figure out the chemical structure of the biosystem and a way of synthesizing it, then they might make some kind of a new pro drug or something like that.

‘Our approach is different in that we’re not seeking to rearrange or modify the naturally occurring spectrum of these compounds – for the very reason that we already know the natural spectrum found in the mushroom works.

‘Patient access is the most important thing right now. We need to get these drugs to people as soon as possible. If we know that this natural combination of chemical constituents works and has been consumed by humans for thousands of years, let’s start there.’

Filament Health is starting to carve a niche in the emerging psychedelic healthcare industry. PSYCH asked Lightburn about the opportunities for investors.

‘I think we can provide the most promising natural alternative to synthetic psilocybin, and that we will be able to compete and win because we can show that our product is more efficacious.

‘Looking at states like Oregon, we can bridge the gap between the pharmaceutical and natural markets and I think we’re the only ones that can. The technology that we developed to manufacture standardised psilocybin and psilocin drug candidates for the FDA is equally applicable to that needed in Oregon.

‘Oregon’s draft regulations do provide for natural extracts, but up until now no one has been able to make a standardised dose of psilocybin and its extracts. In Oregon’s clinics, people will have the choice and may prefer to take a little capsule that contains 20 milligrams of psilocybin rather than five grams of dried mushrooms.’

Lightburn will speak about the development of naturally extracted psychedelic medicines at PSYCH Symposium: London 2022, on Wednesday, 11 May. He outlined the importance of facilitating access to psychedelic healthcare in Europe.

‘One of the most interesting things about the European market, especially the German market, is that it is one of the most naturally focused markets in the world. The EU has a very well-developed herbal medicinal product guidance, which our drug candidates fit very well.

‘These psychedelic therapies have the ability to help people, so we need to lobby for their advancement everywhere in the world at once. The need is global and the need is now.’

To secure your ticket to Europe’s premier psychedelic healthcare conference and connect with industry influencers, please visit the website: https://www.psychsymposium.com/