Psychedelic healthcare: the next five years

This week COMPASS Pathways provided an eagerly anticipated update from its Phase IIb clinical trial. The largest ever study with psilocybin comprised 233 patients and found a single dose of psilocybin, given in conjunction with psychological support, rapidly reduced symptoms of depression.

Globally there are over  80 active Phase II trials with psychedelic medicines, with MAPS’ MDMA formulation to treat PTSD the only in Phase III. The company expects regulatory approval in North America by late 2023, and in Europe by the fourth quarter of 2024.

Developers of psychedelic medicines are now valued at over US$10 billion, with a growing base of institutional investors hoping to scale businesses showing scientific and commercial potential. However, drug discovery and development is an extensive process, taking several years to progress through clinical trials and gain regulatory approval.

The Psychedelics as Medicine Report: Third Edition revealed the psychedelic healthcare industry is worth US$190 million and is expected to exceed US$2.4 billion by 2026. The projections were based on the value of MDMA, psilocybin and ketamine assisted therapies, with the psychedelic medicines either already harnessed in therapy or close to being approved. 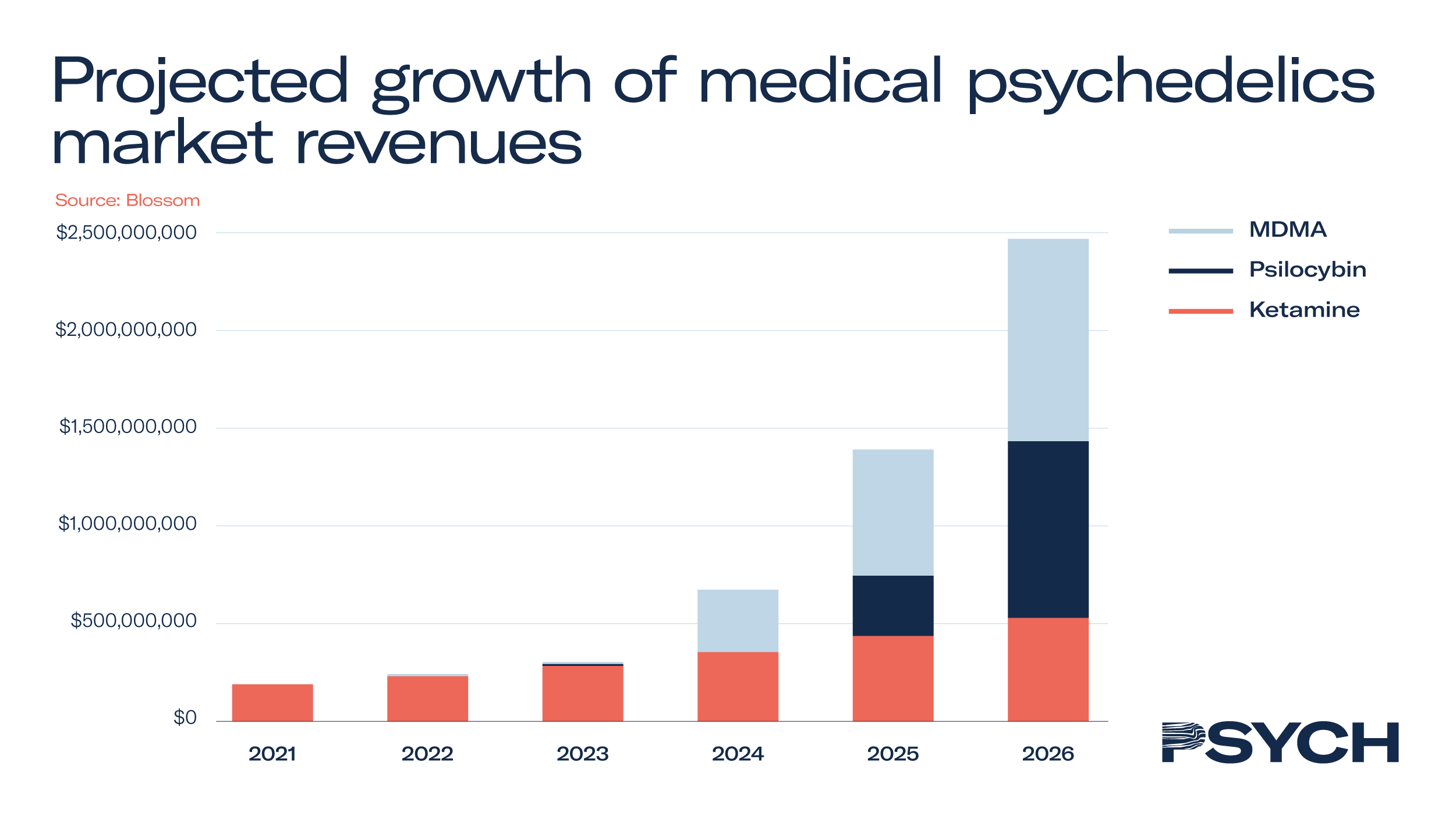 Christian Angermayer, Founder and Chairman of atai Life Sciences, contributed to the report and commented: ‘I believe that psychedelics represent one of the best shots we have in combating the mental health crisis. So now it’s all about execution, transforming the prior evidence we have on psychedelic compounds into FDA-compliant, modern, rigorous scientific data, so that we can bring new treatments to the people who really need them.’

Despite being a Schedule 1 drug under the UN’s Convention on Psychotropic Substances treaty of 1971, MDMA is currently available for compassionate use in Israel, Switzerland and Canada.

Following regulatory approval, MDMA could be used to treat patients in the US and Israel within six months, with adoption in Europe dependent on further clinical trials on the continent.  Based on MAPS’ therapy goals during its data exclusivity period from 2023 to 2029, revenue gains from therapy and therapist training have been forecast in the region of US$7 billion.

COMPASS Pathways shared an eagerly anticipated update from its Phase IIb study earlier this week. The objective of the trial was to find the appropriate dose for a larger, pivotal Phase III programme, which COMPASS expects to begin in 2022.

The clinical trial was the largest ever conducted with psilocybin, with the multi-site study involving 233 participants across 10 countries. In light of mounting evidence on psilocybin’s antidepressant qualities, regulatory changes are already happening at the local level, particularly in the US, with psilocybin decriminalised in Oregon and penalties reduced in Colorado, New Jersey and Washington.

Widely regulated in jurisdictions internationally, ketamine is the only psychedelic medicine currently used off-label to treat mental health conditions. Consequently, ketamine-assisted therapy dominates psychedelic healthcare and is expected to do so until 2025. Over 100 ketamine clinics are in operation across the US, and Awakn Life Sciences opened the UK’s first ketamine-assisted therapy clinic earlier this year.

‘The delivery of biologic medicines, which need to be injected or infused, is a US$100 billion-a-year business in the US. Biologic medicines have a striking level of efficacy and need to be administered in a specialised setting, like psychedelics. As a result, we see literally hundreds of thousands of patients needing a specialised setting to receive innovative medicines in the 2025/2026 timeframe,’ commented NeonMind’s CEO Robert Tessarolo.

The promise of psychedelic healthcare

Investor interest in psychedelic medicines has been driven by their heightened efficacy when compared with traditional treatments, alongside recognition of the costs of treating these conditions and the resulting losses from impaired productivity.

Depression affects more than 300 million people globally, and cost savings through recouped capacity and output could be worth US$64 billion to European countries. In the US, where generalised anxiety disorder affects as many as 9 million people and healthcare costs are higher, savings have been estimated at US$270 billion. 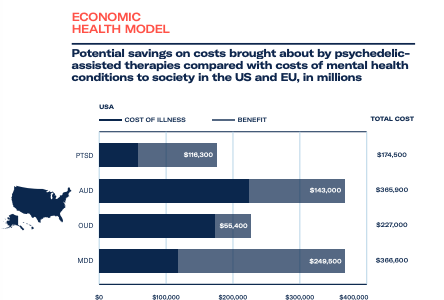