In 2021 the psychedelic healthcare market was worth US$190 million, dominated by ketamine-assisted therapy. Distinct from other psychedelic medicines, ketamine is dissociative with psychedelic properties and features on the World Health Organization’s List of Essential Medicines as an anaesthetic.

Traditional psychedelic medicines work by binding to receptors that detect serotonin, antagonising the 5-HT2a receptor specifically. Ketamine, however, works by activating AMPA receptors, which are responsible for the majority of excitatory synaptic transmissions throughout the central nervous system, strengthening the connections.

It was first synthesised in 1962 and approved by the FDA in 1970, with extensive research conducted on its efficacy in mental illness. It is widely used off-label to treat a variety of mental health conditions in conjunction with therapy, utilising its psychoactive and sedative attributes.

However, while ketamine has been administered off-label for depression for many years, it wasn’t until 2019 that esketamine, a ketamine derivative, was ratified by the FDA for treatment-resistant depression and psychiatric emergencies.

The esketamine nasal spray is manufactured by Johnson & Johnson under the brand name Spravato, with ketamine therapy available through over 150 clinics across North America and Europe. Publicly listed Awakn Life Sciences opened the UK’s first ketamine-assisted therapy clinic in March last year, with a course of low-dose treatments alongside talk therapy costing £6,000.

Ketamine in the UK

The company recently signed a memorandum of understanding with Devon Partnership NHS Trust and the University of Exeter to assess the NHS’s readiness to adopt ketamine-assisted therapies. PSYCH spoke with Professor Celia Morgan, head of ketamine-assisted psychotherapy for addiction at Awakn Life Sciences, about its importance.

‘If we have to build different models to deliver these treatments, then we need to start thinking about that,’ commented Morgan. ‘It’s huge that the NHS has identified the need and wants to be involved from the outset, which is excellent, and we’re really enthusiastic to partner with them.

‘The work with the Devon Partnership Trust will focus on our ketamine treatment, as it’s been through Phase II clinical trials and is about to enter Phase III. The treatment models we’re implementing in the NHS, however, would be able to fit around other psychedelic medicines like MDMA and psilocybin.

‘The data around these two compounds in particular suggest that these treatments are really effective, so it would be a shame if patients missed out on them because of our sometimes slow and unwieldy state-funded healthcare and commissioning systems.’

‘Treatment providers across the UK are desperate for new treatments to offer their patients,’ said Morgan. ‘It is a privilege to be able to do this work to try and get more patients access to a revolutionary treatment. There are not a lot of clinical trials taking place to discover alternative treatments, so it’s really exciting for both clinicians and patients that we’ll be able to offer something new.’ 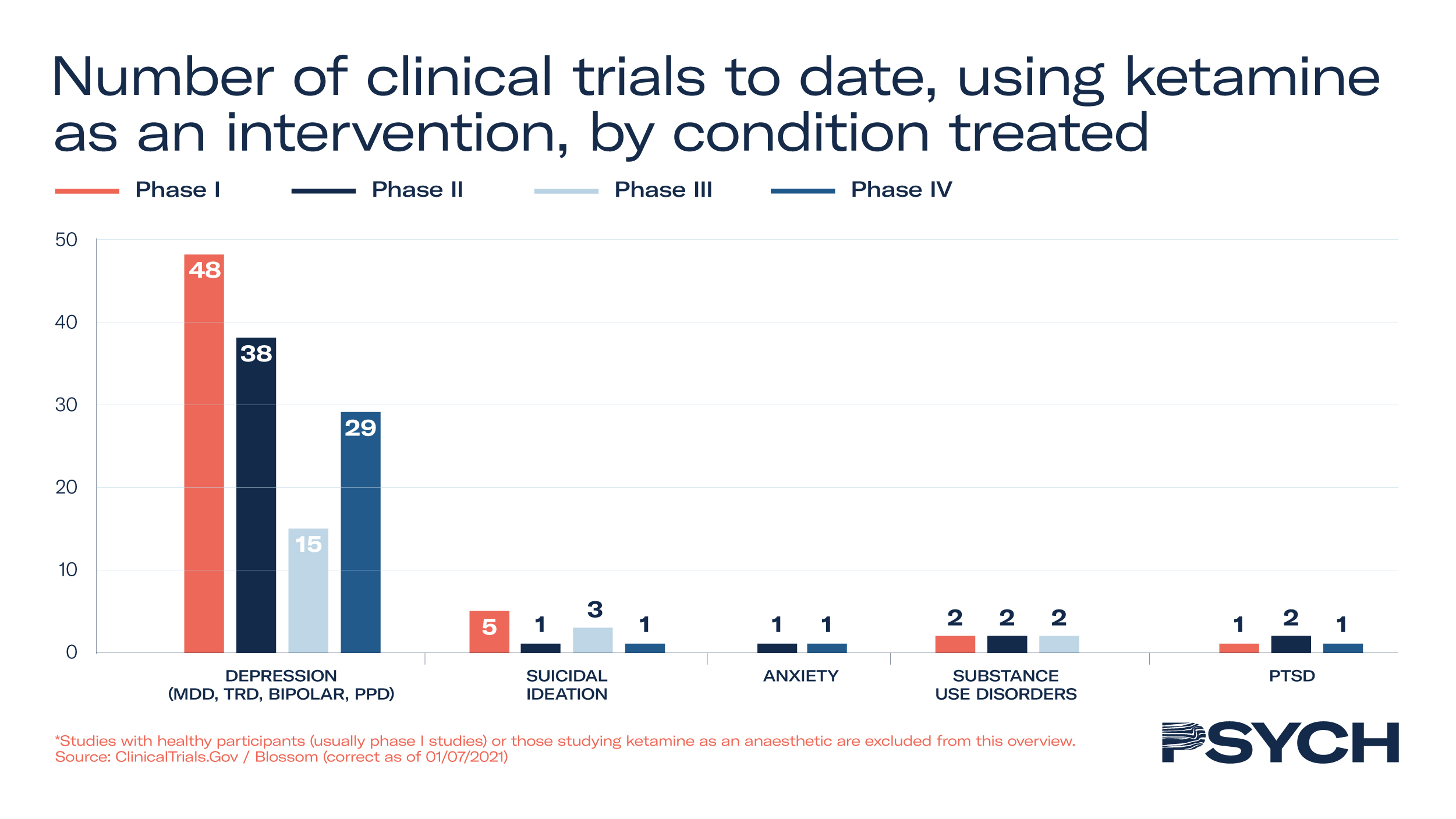 Excluding studies that look at the anaesthetic effects of ketamine, 140 clinical trials have taken place, of which 22 are in Phase III and 32 are Phase IV. Research in patient populations has demonstrated ketamine’s efficacy for treatment-resistant depression, PTSD, bipolar disorder, anorexia and chronic pain.

Similar to psilocybin, the duration of ketamine’s efficacy has been disputed, with some patients returning to the same level of depression 28 days later. In 2021, two studies sought to reinforce ketamine’s therapeutic value when administered repeatedly.

The first study found that a 96-hour infusion of intravenous ketamine lowered depression scores for those with treatment-resistant depression for up to 50 days later. The second trial gave six weekly oral doses of ketamine to those suffering with suicidal ideation, with significant reductions in symptoms up to four weeks after the end of the study.

The Psychedelic as Medicine Report: Third Edition revealed revenues from ketamine-assisted therapy for treatment-resistant depression and major depressive disorder, at US$600 per session, could exceed US$230 million by the end of 2022. By the end of the decade this number should swell to US$1 billion, with over 500 clinics and 1.5 million patients treated.