Lysergic acid diethylamide is a synthetic serotonergic psychedelic. It binds to both serotonin and dopamine receptors, in key contrast to psilocybin, and its effects are noticeable at dosages measured in the millionths of a gram.

In November 1938, Albert Hofmann synthesised LSD-25 for the first time. By 1947, it was introduced as a psychiatric medication under the trade name Delysid by Sandoz and was found to disrupt negative thought patterns.

Studies throughout the fifties and sixties resulted in over 1,000 scientific papers on the potential applications of LSD-25. Trials were conducted to study the effect on alcohol dependence, autism and schizophrenia, but due to the lack of control groups and ethical review boards much of the data generated fails to reach today’s standards of objectivity.

In response to a rise in recreational use, the states of California and Nevada banned the manufacture, sale and consumption of LSD. This was reinforced nationwide by the Staggers-Dodd Bill of 1968, which prohibited possession of LSD and other stimulants and depressants without a prescription.

Abuse of the compound was indicted as public enemy number one by President Nixon in his infamous War on Drugs speech. This influenced the UN’s publication of the 1971 Convention on Psychotropic Substances, which made psychedelic medicines including LSD, DMT and MDMA internationally controlled substances. This largely stopped research on LSD’s medical potential until the end of the 20th century. 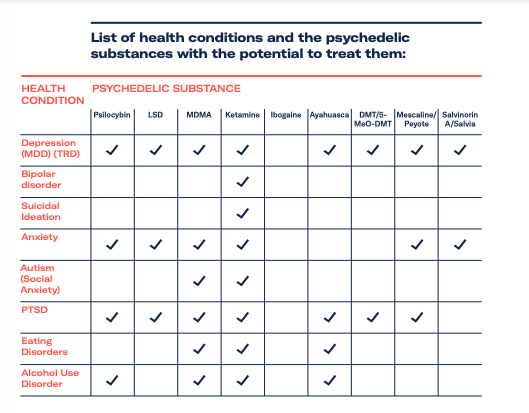 Although less intensely studied since then, LSD has played a pivotal role in psychedelic research and the discovery of serotonin receptors in the brain. In the current era of research, 19 clinical trials have been conducted with LSD. Of those, four are in the Phase II stage, and last week MindMed announced the FDA had approved its Phase IIb trial in the treatment of generalised anxiety disorder.

It is the first commercial study of LSD in over 40 years and speaking on the announcement MindMed CEO Rob Barrow commented, ‘With a clear regulatory path, we look forward to building on this momentum and advancing this trial as quickly and efficiently as possible.’

In April 2020, MindMed filed a patent in the US (preserving worldwide rights) for a neutraliser technology intended to shorten or eliminate the effects of an LSD trip during a therapy session. If sufficiently developed, this technology could effectively act as an ‘off-switch’ to an LSD trip. 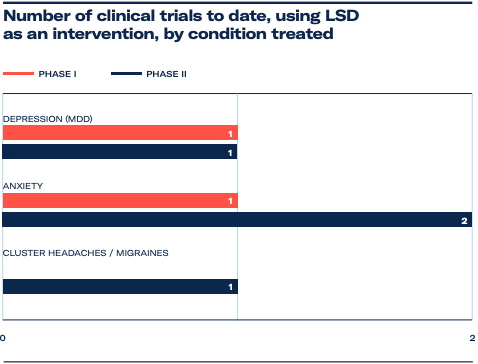 Studies have found that people who lack copies of the Cytochrome P450 gene, which codes for an enzyme that breaks down LSD, had up to 75% more exposure to the psychedelic medicine in their blood plasma levels. These individuals had more intense and longer-lasting LSD experiences, with conclusions from genetic data leading to the development of personalised dosing.

In the UK at Imperial College London, the Centre for Psychedelic Research has been established with £3 million in capital. Researchers from the group previously studied the effects of LSD on brain activity, and will now investigate the potential of psychedelic medicines to treat mental health disorders.