Last year MAPS completed its Phase IIIa trials with MDMA in the treatment of PTSD. The subsequent data release grabbed headlines internationally, with MDMA expected to be the first classic psychedelic medicine approved for clinical use in the 21st century. In 2022 MAPS is set to complete its Phase III trials, in preparation for treatment approval by the FDA and MHRA in 2023 and 2024 respectively.

MDMA was first synthesised in 1912 by Dr Anton Köllisch at Merck, and patented by the company in 1914. However, its therapeutic utility lay undiscovered until research by acclaimed tryptamine chemist Alexander Shulgin half a century later. Shulgin introduced the compound to his wife, a psychotherapist, for use in couples therapy.

MDMA is an empathogen, a psychoactive chemical that elicits feelings of empathy, similar in structure to both mescaline and methamphetamine. In response to a rise in recreational use in nightclubs, the DEA declared an emergency ban on MDMA in 1985, despite its medical potential. 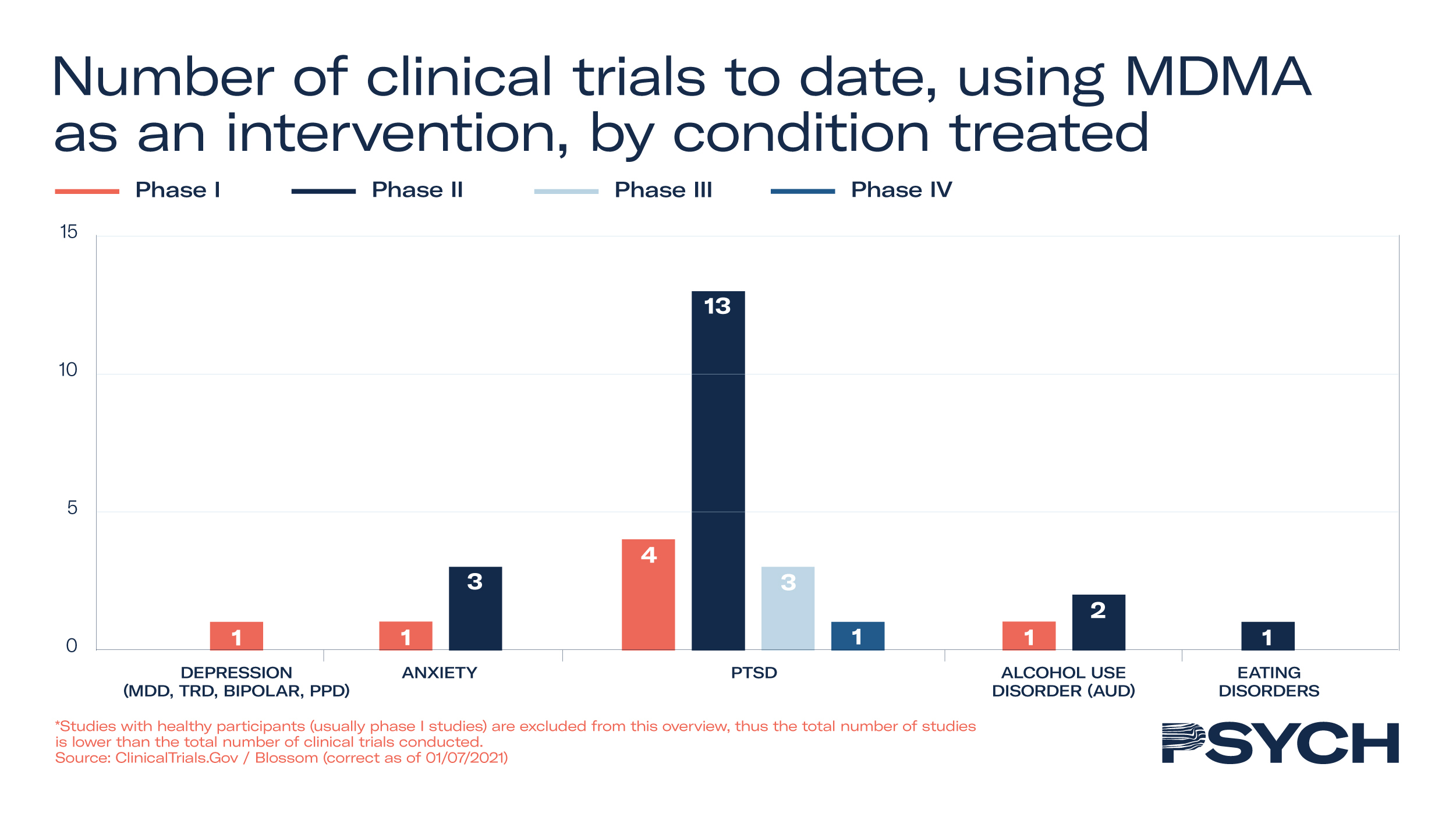 Forty-seven clinical trials have been conducted on MDMA’s efficacy to treat mental health disorders, with 19 progressing through to Phase II and III studies. In addition to MAPS’ Phase III trial to treat PTSD, the company is exploring its utility in Phase II trials to treat anxiety-related disorders. To support the development of MAPS’ MDMA treatment, the FDA granted Breakthrough Therapy designation to the psychedelic medicine in 2017.

In the UK, Awakn Life Sciences’ Phase II trial has demonstrated significant potential to treat alcoholism. The Bristol Imperial MDMA in Alcoholism trial, an open-label safety, tolerability and proof-of-concept study, indicated that only 21% of patients who received MDMA-assisted therapy return to pre-treatment levels of drinking after nine months, compared to 75% with conventional treatments. 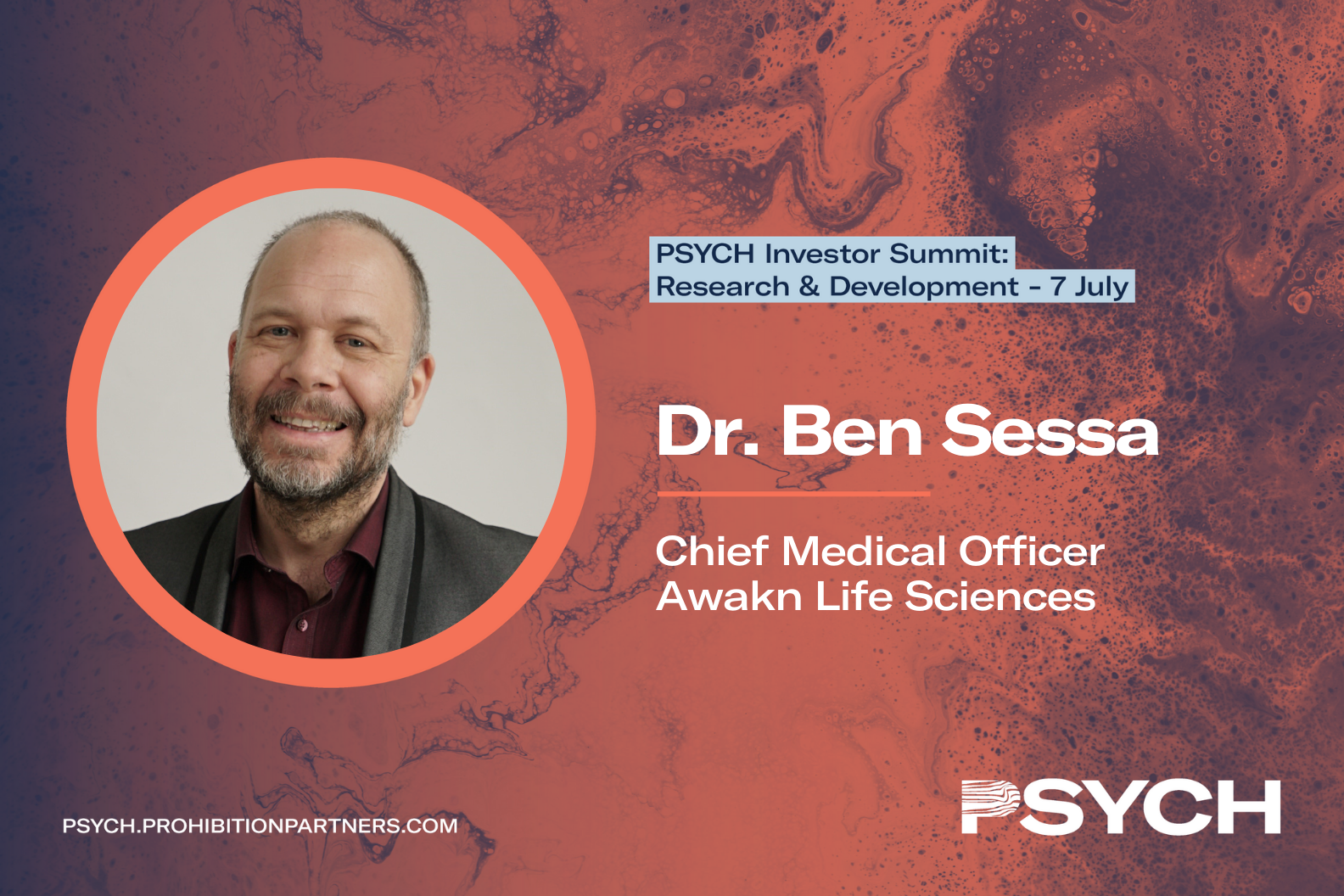 In MAPS’ Phase III study to treat PTSD, 90 participants received 12 therapy sessions, of which 3 were with either placebo or MDMA. Of those who received MDMA, 67% no longer qualified for PTSD diagnosis and 88% saw a clinically significant reduction in symptoms.

The data represents half of the participants who will be treated in the full Phase III trial, with the results from the second half expected later this year. The clinical trials are conducted by MAPS PBS, a wholly owned subsidiary of non-profit organisation MAPS, which aims to make MDMA-assisted therapy as widely accessible as possible.

With FDA approval anticipated in 2023, health practitioners may be able to provide MDMA-assisted therapy as early as next year. Based on MAPS’ therapy goals during its data exclusivity period from 2023 to 2029, revenue gains from therapy and therapist training have been forecast in the region of US$7 billion.

A key driver behind the FDA’s support of MDMA-assisted therapy is PTSD’s heavy burden on the US economy. A total of 870,000 veterans are in receipt of disability payments for PTSD from the Department of Veterans Affairs, which costs the government an estimated US$17 billion a year.

The Psychedelics as Medicine Report: Third Edition estimated revenues from MDMA treatments for PTSD, at a cost of US$7,543 per session, could hit US$15 million in 2023 and exceed US$600 million by 2025. This is supported by a huge patient population, with 327 million adults suffering from PTSD and major depressive disorder worldwide.

With regards to alcohol use disorder, the affliction costs European economies a staggering US$88.5 billion, and psychedelic-assisted therapies could save US$31 billion – with MDMA poised to disrupt the market. For further investor intelligence on the psychedelic science and healthcare industry, download The Psychedelics as Medicine Report: Third Edition, powered by Blossom.

To alter public perception and promote the acceptance of psychedelics as medicines, Gwella launched Mojo – a functional mushroom product