Psilocybin is a naturally occurring prodrug found in over 200 species of fungi. When ingested and metabolised, psilocybin converts into the tryptamine alkaloid psilocin, which imitates the neurotransmitter serotonin to produce psychoactive effects.

Brain imaging studies suggest high doses of psilocybin disrupt negative thought patterns through frenzied neurodynamics, which creates different neural pathways than those habitually used. By disrupting default mode networks, psilocybin can lead to a loss of self-awareness, or ego dissolution, considered fundamental to the psychedelic experience. This triggers opportunities for creativity outside the usual realm of consciousness, which can be particularly beneficial in psychotherapy.

Psilocybin, after ketamine, is the second most studied psychedelic medicine – 64 clinical trials have been conducted, 26 of which are in Phase II. A total of 21,000 subjects have been enrolled in the studies to treat a wide range of illnesses, including addiction disorders, cluster headaches, fibromyalgia and, most extensively, treatment-resistant depression.

In an exclusive contribution to The Psychedelics as Medicine Report: Third Edition, George Goldsmith, CEO at COMPASS Pathways, said: ‘We need to generate data, through rigorous clinical trials, that demonstrate quality, safety and efficacy of psilocybin therapy. Only then can it be approved by regulators, reimbursed, and made available to as many as possible.’

UK-based COMPASS Pathways recently reported top line data from its Phase II trial to combat treatment-resistant depression, with its proprietary psilocybin formulation COMP360. The study was the largest ever conducted with psilocybin, with 216 patients treated and hosted at 22 sites across Europe and North America.

The data demonstrated that COMP360 was well tolerated in patients and produced a statistically significant reduction in depression symptoms. A patient’s severity of depression is charted on the Montgomery–Åsberg Depression Rating Scale (MADRS), which ranges from 0 – 60, with individuals at zero expressing no symptoms of depression.

Scores on the MADRS depression scale fell the day after a single COMP360 dose, with the steepest decline seen in patients who received 25mg, the highest dose. This was still observed at three weeks, at which point the average MADRS score in the 25-mg cohort was 6.6 points lower than in the 1-mg arm.

Concerns over the treatment’s durability marred the results for investors, as just one in ten patients who received 1mg had a sustained response at week 12. Off the back of the results, shares in COMPASS fell 20%, with the data released in tandem with financial results reporting net losses of US$100 million. 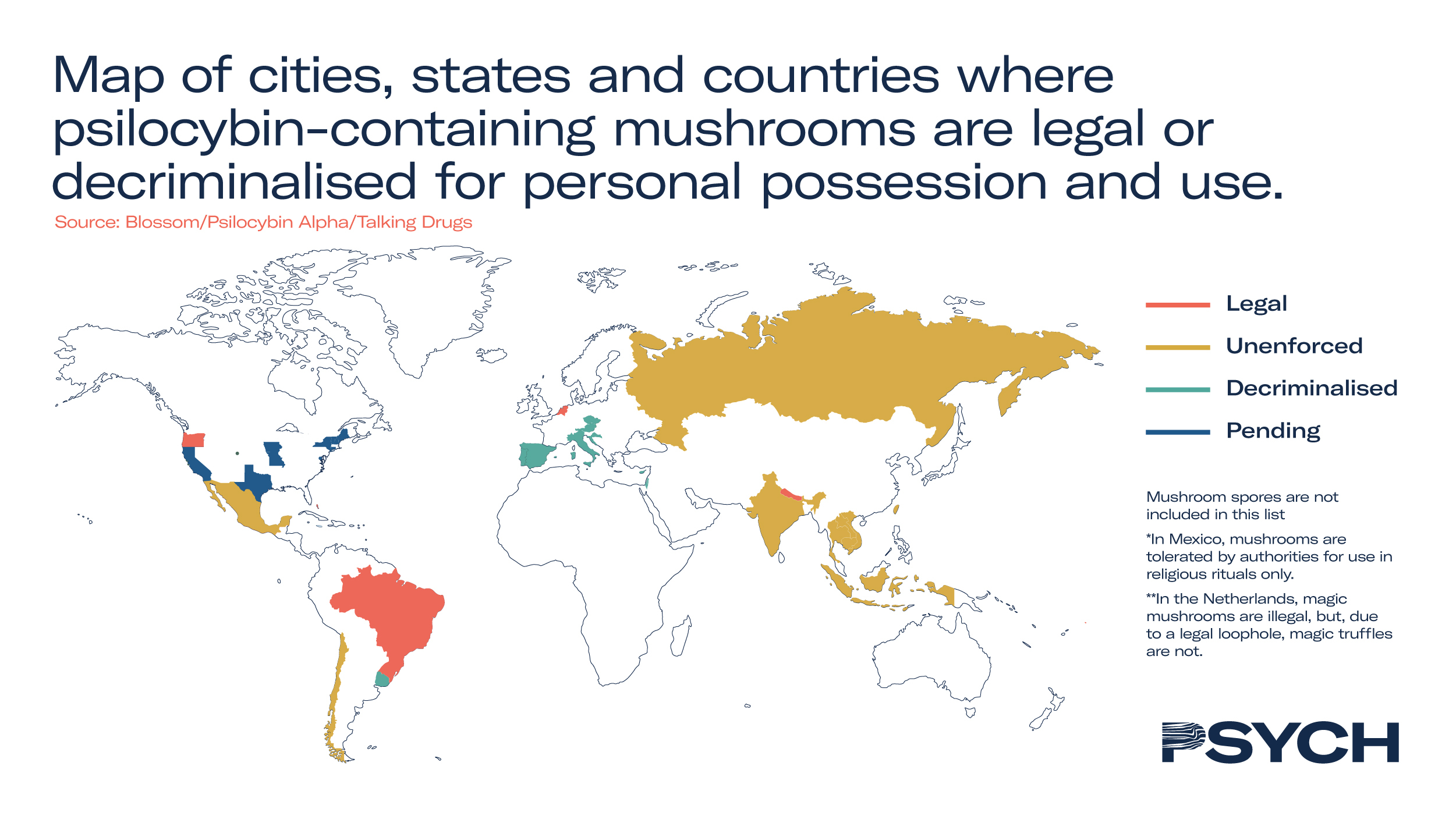 These figures shouldn’t be overly concerning for seasoned investors, as drug developers often accrue high operating costs on the road to market exclusivity.

The Psychedelics as Medicine Report revealed revenues from psilocybin-assisted therapy for treatment-resistant depression could generate $270,655,000 in 2023, and exceed $1,000,000,000 by 2029. However, the company’s patents related to psilocybin have been challenged and decriminalisation efforts are potentially opening markets to other providers.

Cities in Colorado and California approved the decriminalisation of psilocybin-producing fungi in 2019. In 2020 Oregon decriminalised psilocybin and moved to regulate psilocybin-assisted therapy, accepting applications for registered practitioners from 2023.

There are now 15 jurisdictions in the US that have either deprioritised the prohibition enforcement of psilocybin possession, or decriminalised the psychedelic compound altogether. Many of these amendments have been enacted under wider legislation pertaining to plant medicines, with the possibility of federal medical programmes for psilocybin as early as 2025.

In the UK Boris Johnson acknowledged calls to reschedule psilocybin last year, responding that he would consider ‘recent advice on reducing barriers to research with controlled drugs’. Advocates hope the UK could soon reschedule psilocybin to reflect mounting evidence about their therapeutic potential. However, MP Crispin Blunt, from the Conservative Drug Policy Reform Group, remained wary of the Prime Minister’s intentions.

Speaking with PSYCH on the campaign, Blunt said: ‘The government’s inability to support the development of this industry with the appropriate regulatory framework means the government is not playing its part, as it should be, in supporting the great strength of British science and research. It ought to be creating a very benign and supportive environment for investors, which would help elevate the industry to its maximum potential.’

To alter public perception and promote the acceptance of psychedelics as medicines, Gwella launched Mojo – a functional mushroom product