Access to therapists is critical to the adoption of psychedelic-assisted therapy, and ensuring market access is crucial for the industry to realise its potential.

A shortage of trained therapists has been cited as an obstacle to the scalability of psychedelic healthcare, with organisations creating therapist training programmes and protocols to expand patient access.

Over 800 healthcare practitioners have undergone MAPS’ therapist training programme, with the organisation hoping to train 20,000 psychedelic-assisted therapists by the end of the decade.

In June, MAPS negotiated with the FDA to lift a hold on a MAPS-sponsored Phase II study of MDMA-assisted group therapy. This would enable six patients to undergo psychedelic-assisted therapy with one therapist, significantly expanding the treatment’s addressable market.

A key driver behind the FDA’s support of MDMA-assisted therapy is PTSD’s heavy burden on the US economy. A total of 870,000 veterans are in receipt of disability payments for PTSD from the Department of Veterans Affairs, which costs the government US$17 billion a year. 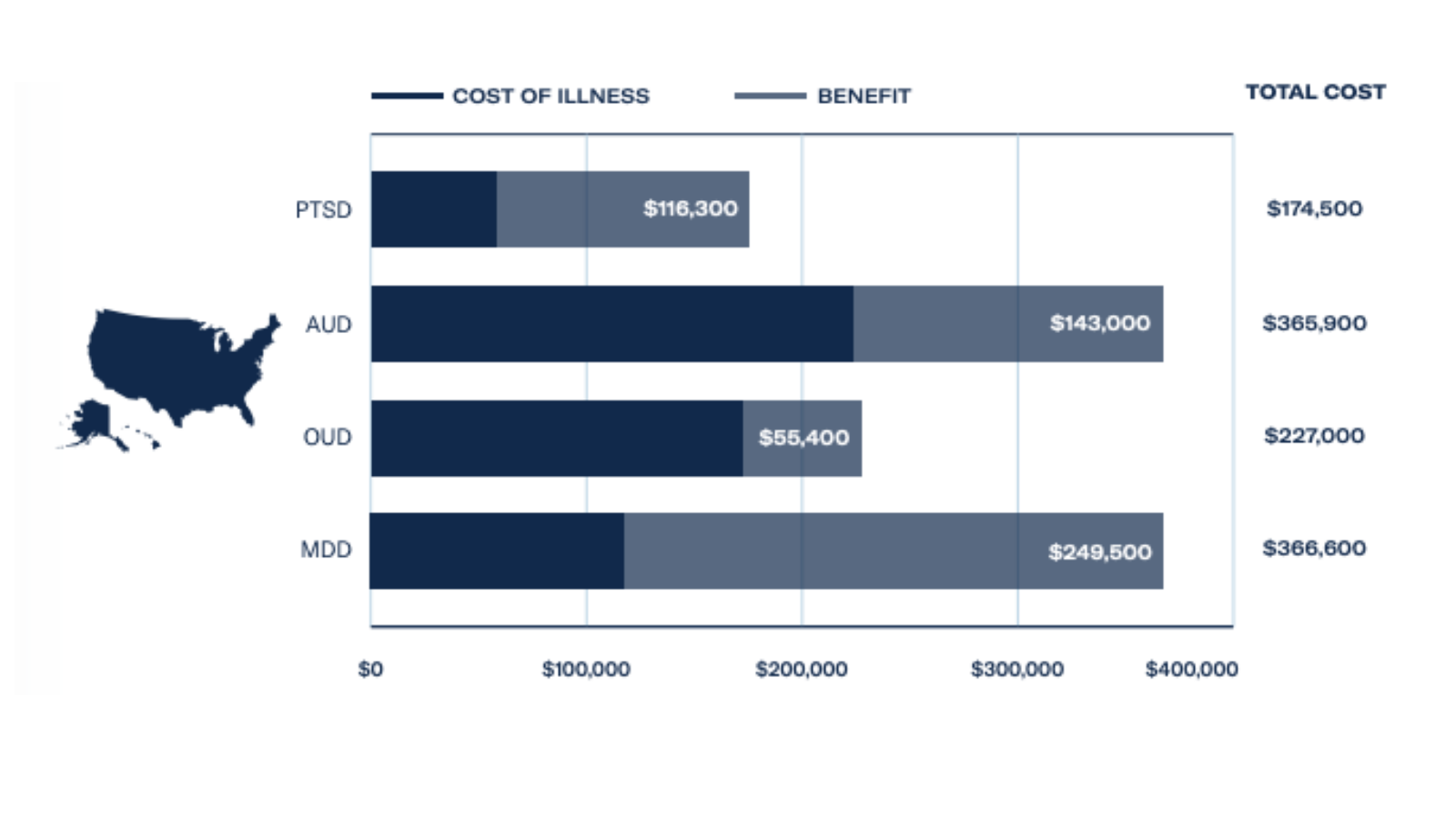 The MAPS-sponsored PTSD trials are being led by Chris Stauffer MD, at Veterans Affairs hospitals in Oregon. ‘There is so much yet to explore regarding the relational potential of MDMA-assisted therapy, and research on group therapy combined with MDMA sessions is a logical next step,’ said Stauffer.

‘What drives this work for me are the unique therapeutic properties of group cohesion that I’ve witnessed in my previous group therapy trials with oxytocin and psilocybin. If the FDA finds MDMA-assisted therapy to be safe and effective, the benefit of the group model for scalability and access could be an added bonus.’

Following the FDA’s expected approval of MAPS’ MDMA treatment next year, the organisation will have six years of data exclusivity. During this time, MAPS needs to treat as many patients as possible, to maximise the return on its investment.

MAPS aims to build a network of 24,000 psychedelic therapists, to treat 500,000 patients before the end of 2029. In which time, MAPS could generate over US$7 billion through MDMA-assisted therapy and training services.

MAPS hopes its MDMA-assisted therapy will be regulated in Europe in 2024, where data exclusivity extends to eight years. However, in Europe’s publicly funded healthcare systems, cost is king. This heightens the importance of group therapy and innovations, such as shorter-acting tryptamines, which reduce the price of treatments for payees.

Although the MHRA provided MAPS with an Innovation Passport to support regulatory approval in the UK, the regulatory body also approved Spravato – only for coverage to be later rejected by the National Institute for Health and Care Excellence (NICE).

‘Introduction of esketamine into clinical practice in the [National Health Service] will be complex because the structure and delivery of services would need to be changed. Estimates of the costs of providing the clinical service for esketamine were highly uncertain, as are the costs of repeated courses of the drug.’

This illustrates the challenges drug developers face to provide psychedelic medicines to patients, even after they have been regulated. This is why minimising the cost of psychedelic-assisted therapies, and refining their delivery, will be key to maximising their adoption.

The Psychedelics as Medicine Report predicted that by the end of 2023 there could be 1,000 therapists trained to deliver MDMA-assisted therapy. If group therapy proves effective, these 1,000 therapists could treat 6,000 patients, greatly expanding the treatment’s accessibility. Another means to expand patient access is by reducing the reliance on therapists, through the development of psychedelic treatments with shorter durations.

‘Accessibility is really the core of everything we’re trying to do,’ Cybin’s CEO Doug Drysdale told PSYCH. ‘Part of the challenge in converting these classical psychedelic molecules into prescribable therapeutics is to overcome some of those limitations that impact accessibility.

‘Patients can be in the clinical setting for a whole day, eight hours or so. When we speak to our partners who run depression clinics and addiction clinics, they really struggle with that, as many only have a handful of treatment rooms.

‘To take up a whole room for a whole day with a single patient is inefficient and probably not practical. This resource requirement limits accessibility for patients, so we’ve managed to increase the speed of onset by two times and cut duration in half.

‘This means a patient will spend less than half of the time in the clinic than they would with traditional psilocybin. This frees up the resources and makes the treatments more accessible.’

Psilocybin is not expected to be regulated by the FDA until 2024, when COMPASS’s psilocybin therapy for treatment-resistant depression completes Phase III trials. Even then, MDMA-assisted therapy is expected to comprise the lion’s share of the psychedelic healthcare market, due to MAPS’ head start in therapist training.

PSYCH forecasts that in 2024 there will be 4,000 therapists trained with MDMA but only 1,750 trained with psilocybin. This has significant consequences for the uptake of the psychedelic-assisted therapies, especially with the creation of regulated adult-use frameworks.

Further data on therapist training in psychedelic healthcare can be found in The Psychedelics as Medicine Report. The publication contains 200+ pages of industry intelligence, empowering investors to make informed decisions. Download your complimentary copy: https://psych.global/report/

The Power of Bipartisan Support

Last week, the U.S Department of Health and Human Services revealed the government expects both MDMA and psilocybin to be

There are strong signs Europe and North America are about to enter a recession, as sanctions against Russian oil and

A public listing in psychedelic healthcare