In a milestone for psychedelic healthcare, Oregon has published the first regulations for its psilocybin framework – governing product, testing and training programmes.

The US state became the first to vote to legalise psilocybin, with several others expected to follow suit. Many will look to Oregon as a case study, and if the framework is successful, it could be replicated across the nation.

As a result, the legislation adopted in Oregon could have significant implications for the roll-out of psychedelic medicine in North America.

The Psilocybin Services Act, passed in November 2020, established a programme for adults over 21 to purchase, possess and consume psilocybin at licensed centres.

The Act’s nomenclature was careful to distance the programme from being a medical framework, despite Measure 109’s supporters citing the potential of psilocybin-assisted therapy to treat depression, PTSD and addiction disorders.

As such, participants will not be diagnosed for a health condition, but they must attend a preparation session and consumption must be supervised by a trained facilitator on a licensed premise.

As state legislators move quicker than medical regulators, novel treatments can be made available without federal approval in the US.

Legislation at the local and state level can be pushed through by public advocacy, particularly when propelled by bipartisan support on issues such as mental illness and veteran health care.

This was recently seen in the widespread legalisation of cannabis, despite extensive clinical trials into the efficacy of cannabinoids either alone or in combination.

Federal approval requires rigorous safety and efficacy data from clinical trials, with health practitioners reluctant to recommend therapies without this seal of approval.

This does little to temper the burgeoning market’s potential, as cannabis has not been federally approved and legal sales are expected to hit US$33 billion this year.

Only Psilocybe cubensis mushrooms will be regulated in the programme, with other psilocybin-producing fungi and synthetic psilocybin prohibited.

To secure market exclusivity, many drug developers have patented synthetic psilocybin formulations, or psilocybin derivatives, which will not be permissible in the state’s framework.

In order to participate, they would need to pivot and add new products to their portfolio. The framework does, however, allow for isolated psilocybin, if the compound has been extracted from Psilocybe cubensis.

This means drug developers such as Filament Health, which focuses on natural extraction and the development of botanical psychedelic medicines, may be able to supply the jurisdiction with PEX010, its proprietary formulation set to enter a Phase II clinical trial later this year.

‘Until now, no one has made a standardised botanical formulation of these psychedelic raw materials and turned them into a clinical-trial drug candidate,’ Filament Health’s CEO, Benjamin Lightburn, told PSYCH.

‘Looking at states like Oregon, we can bridge the gap between the pharmaceutical and natural markets, and I think we’re the only ones that can.

‘The technology that we developed to manufacture standardised psilocybin and psilocin drug candidates for the FDA is equally applicable to that needed in Oregon.

In Oregon’s clinics, people will have the choice and may prefer to take a little capsule that contains 20 milligrams of psilocybin rather than five grams of dried mushrooms.’ 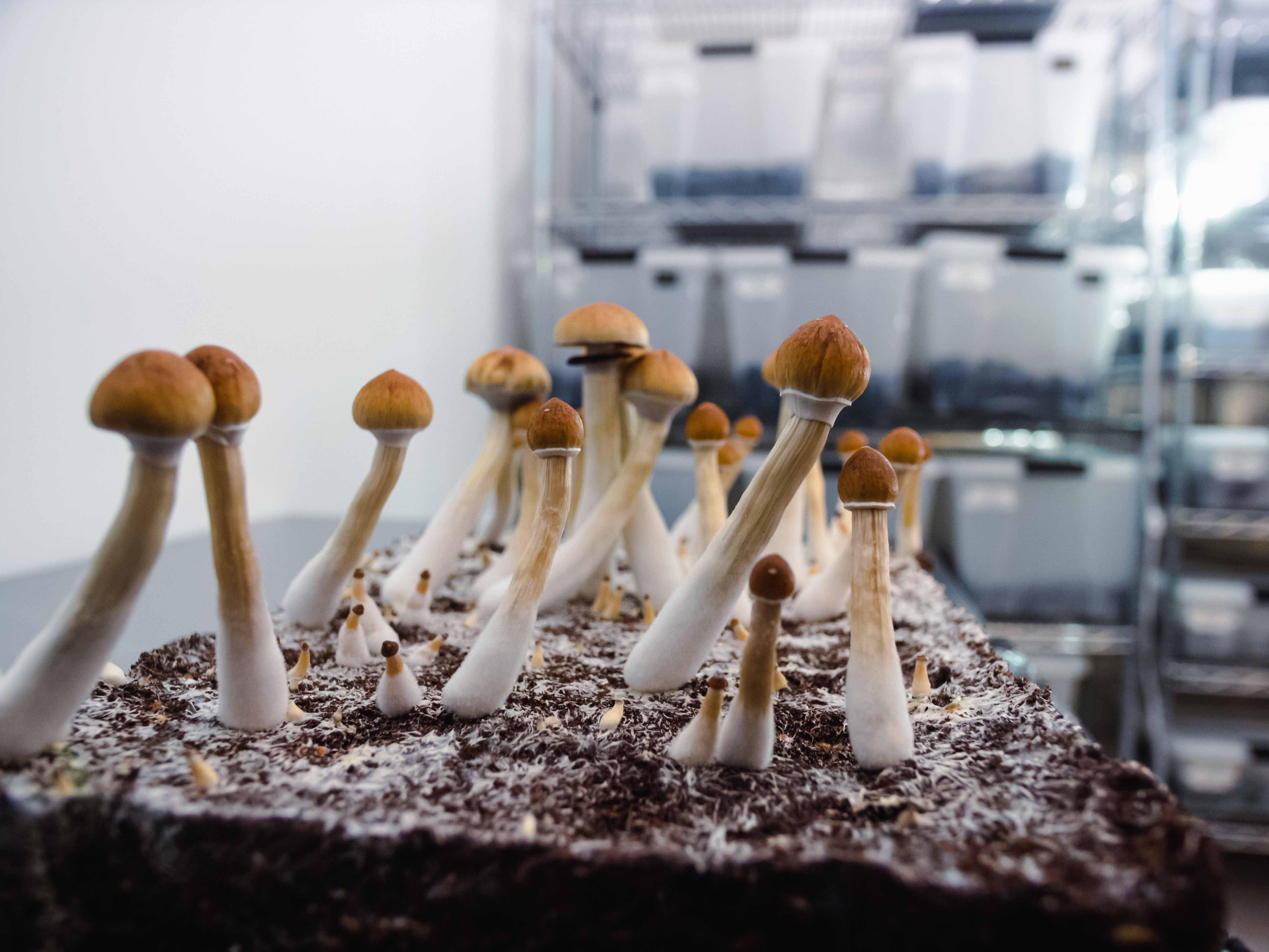 Each batch of mushrooms harvested for the programme will be tested for psilocybin and psilocin. If the levels of compounds deviate by over 20% within a batch, it will fail Oregon’s compliance standards.

However, it can be challenging to cultivate fungi uniformly, with levels of psychoactive compounds varying widely between mushrooms grown on the same substrate in the same flush, and even from different parts of the same mushroom.

To add to this variability, psilocybin is a prodrug, and people metabolise prodrugs at different rates. This means an individual could experience higher levels of psychoactivity with the same 25mg dose of psilocybin if they convert psilocybin to psilocin at a higher rate.

Current research indicates the hallucinogenic response is correlated to the blood plasma level of psilocin – rather than to the oral dosage of psilocybin.

This variability of effect can be mitigated through pharmaceutical development, with second-generation molecules and drug delivery technologies. For instance, companies are looking to bypass the metabolic system by administering psilocin directly into the bloodstream, or by adding carriers to formulations that aid absorption.

However, Oregon’s rules state products must be orally consumable and without substances that affect potency – such as MAOIs. This means variability issues that limit psilocybin’s application in medical settings cannot be solved in the state’s framework.

In the state’s framework, psilocybin must be administered by licensed facilitators at a licensed facility. As a result, those organisations with psychedelic healthcare clinics, clinicians and therapist training programmes are well positioned to leverage their existing expertise.

In Oregon, therapist programmes must consist of 120 hours of training, with 40 of those spent observing or co-facilitating psilocybin sessions, although facilitators do not have to be formally trained mental health professionals.

The early adoption of these rules will allow Oregon Psilocybin Services to start accepting applications for training programmes in June.

Field Trip has announced its intention to expand its footprint into Oregon, and to cultivate Psilocybe cubensis in the state. The company’s Co-founder Ronan Levy commented on the organisation’s decision and business model.

‘We built our business case on the belief that the psychedelic industry would develop on two parallel and complementary paths,’ said Levy. ‘One that would be purely medical for the treatment of diagnosed mental health conditions, and the other which would make psychedelic therapies available to a wider audience.’

The first psilocybin treatment, COMP360, is expected to be regulated in 2024 for a single health indicator – treatment-resistant depression. However, in Oregon from January 2023 any adult over the age of 21 will be able to access psilocybin in a therapeutic setting – regardless of physical or mental health.

While Oregon’s approach certainly expands accessibility, there are concerns that psilocybin provision outside a medical framework could lead to adverse events, which could damage the industry’s reputation.

In a statement on COMPASS Pathways’ website, the company states: ‘To make sure it is safe and effective in patients, psilocybin therapy needs to be approved by medical regulators, not legislators.

‘To do this, we have to run large-scale clinical trials to generate data to show the therapy works and is safe. Only then will it be approved by regulators, and become part of the healthcare system, prescribed by doctors and funded by national bodies, payers or insurers.’

However, if the framework adopted in Oregon is successful and protects consumer safety, it could legitimise the industry. The programme could then be quickly replicated across North America, with campaigners pointing to the state as a proof of concept.

The movement to regulate psychedelic medicines has gained significant progress in California, Colorado and Washington, with Seattle decriminalising non-commercial activity in 2021 – enabling the cultivation of hallucinogenic mushrooms and mescaline-producing cacti.

Organisations that can establish themselves in Oregon, in the nation’s first psilocybin programme, can generate revenue to fund drug development and placate shareholders. A first-mover advantage can also be leveraged to scale and expand into other markets as they emerge.

For investors, Oregon’s psilocybin framework holds significant potential if they can identify successful business models early. If other states adopt similar regulations, market trends seen in Oregon could also be seen elsewhere – providing investors with a valuable window to the future.

The Psychedelics as Medicine Report: Third Edition forecasts revenues from psilocybin will exceed US$270 million by 2025. For 200+ pages of industry data and investment insights, download a complimentary copy: https://psych.global/report/